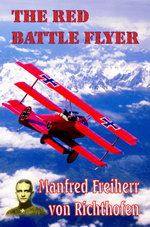 The Red Battle Flyer is Manfred von Richthofen’s autobiography which mainly deals with his role as an ace Fighter Pilot in the First World War for the German forces.

The book describes how he went from being a cavalry officer to an observer on an aircraft, to a fighter pilot, and finally to the most famous fighter pilot of the war.