Murder in the Gunroom 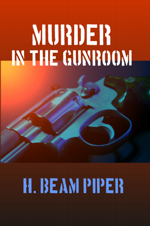 There were a number of people who had wanted the collection. The question was: had anyone wanted it badly enough to kill Fleming? And if so, how had he done it?

This is a mystery that will keep your nerves on a hair trigger even if you don’t know the difference between a cased pair of Paterson .34’s and a Texas .40 with a ramming-lever.