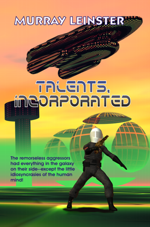 Through peculiar gifts of extra-sensory perception, its personnel could, their leader insisted, out-think and out-guess even the most deadly dictator in the history of mankind. Could it? It just might. And it just might not. . . . But there was absolutely nothing to lose, and a free world (and a beautiful girl) to win. Captain Bors made his decision, and the loaded die was cast!