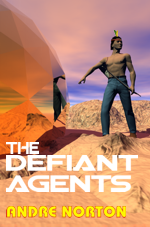 “A tiny sound–perhaps the scrape of a boot on a ladder. Travis edged back into a compartment. A flash of light momentarily lighted the corridor; the approaching figure was using an electric torch. Travis drew his knife with one hand, reversed it so he could use the heavy hilt as a silencer. The other was hurrying now, on his way to investigate the burned-out engine cabin. Travis could hear the rasp of his fast breathing. Now!”

Alien technology scavenged by U.S. and Russian scientists has started a race to colonize planets outside our solar system, but the U.S. scientists are losing the race.

In a desperate move the U.S. government decides to use a group of Apache volunteers in an experimental attempt to colonize a primitive planet, but before they can even begin their spaceship crashes on the planet Topaz…