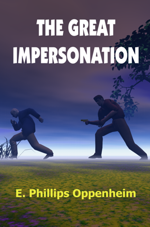 The Great Impersonation is one of the most famous spy novels of all time. This is excellent reading with its fast moving plot and its imagery of the rich life of English aristocrats before the First World War, as well as its bold characters.