The Man-eaters of Tsavo 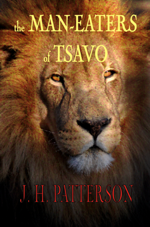 And Other East African Adventures

In 1898, the British East Africa Company commissioned Col. John H. Patterson to oversee the construction of a railway bridge over the Tsavo River in present-day Kenya. Almost immediately after his arrival, lion attacks started to take place on the workers, with the lions dragging men out of their tents at night and feeding on their victims.

Despite taking various measures to curb the attacks, they escalated dramatically, and eventually the bridge construction stopped due to a mass exodus of the workers. The superstitious workers became increasingly hostile and many of them were certain that the lions were evil spirits who came to punish the bridge builders.

With his reputation, livelihood and personal safety at stake, Patterson realized that he had to deal with the crisis in the only way he knew how – hunt the man-eaters down and kill them.

This true story was the basis for 3 films; The Ghost and the Darkness (1996), starring Val Kilmer as Patterson, being the latest.