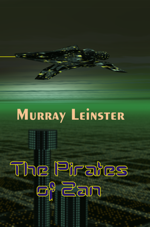 His first step to making himself a good reputation was to invent a machine that would save the government millions. But when instead he was seized and jailed as the most unspeakable criminal in Walden’s history, he realized that there was only one way open to remedy this “civilized” disaster – and that was by putting into use some of Zan’s old-fashioned buccaneering techniques!

Please note that actual prices may differ from those quoted here, since certain booksellers may apply discounts from time to time and some retailers’ prices are linked to fluctuating exchange rates.