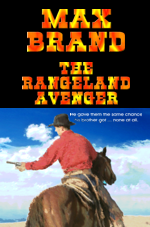 He gave them the same chance his brother got … none at all.

“At once the blind anger faded from the eyes of Riley. By the weight of that first blow he knew that he had encountered a worthy foeman, and by the position of Cartwright he could tell that he had met a confident one. The big fellow was perfectly poised, with his weight well back on his right foot, his left foot feeling his way over the rough ground as he advanced, always collected for a heavy blow, or for a leap in any direction.

“He carried his guard high, with apparent contempt for an attack on his body, after the manner of a practiced boxer. As for Riley Sinclair, boxing was Greek to him. His battles had been those of bullets and sharp steel, or sudden, brutal fracas, where the rule was to strike with the first weapon that came to hand. This single encounter, hand to hand, was more or less of a novelty to him, but instead of abashing or cowing him, it merely brought to the surface all his coldness of mind, all of his cunning.”