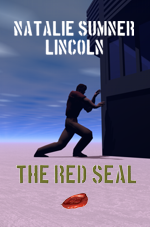 After an autopsy, the burglar is found to have died from poisoning. Was it suicide or murder? The sisters think it was the latter and try to find out who the murderer was. Suspicion shift from the one suspect to the next and a mysterious white envelope with a red wax seal appears and is passed from one person to the other.

What is the content of this envelope, and what role does it play in the whole mystery?