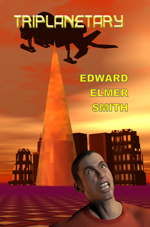 Triplanetary was first serialized in Amazing Stories in 1934 and it later on formed the first of the Lensman series, where it set the stage for what is one of the greatest space-opera sagas ever written.

This original publication brings us to a distant planet inhabited by a highly developed aquatic race called the Nevians. They have managed to harness the atomic power of iron and have an enormous need for the metal to generate energy, but their planet has virtually no iron reserves.

They build a spaceship to venture into the universe and find iron. Eventually they discover that Earth has huge amounts of iron and the Nevians start to extract all the iron out of Pittsburgh with a special ray. This ray shoots into the city and immediately vaporizes and removes any iron from the buildings, machines, earth, and even from human blood.

It is up to Conway Costigan, a mercilessly competent, two-fisted whiz agent of the military Triplanetary Service, and his colleagues to save the planet.